Here We Keep Going Again: Mamma Mia and Us 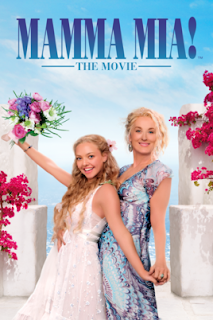 The other night, we were flipping through the channels with much disappointment. Every one of our go-to cable distractions was a miss. There was nothing left on the PVR for us to burn through. We were lost. I excused myself to the restoom, and while I was in there, I heard from the other room the voice of one Christine Baranski softly crooning "Chiquitita" to Meryl Streep. I smirked - as is bound to happen from time to time, my fiancee had found Mamma Mia on TV somewhere.


At the risk of relying on a sweeping gender stereotype for the premise of this article, most women I know seem to spend a lot of their time in a state of having just watched Mamma Mia. And by the time they're ready to watch it again, there it is on TV, ready for them. It is the duty of every male in a heterosexual coupling to make their peace with their partner's love of Mamma Mia. If you happen to be in one of those outlier relationships where your partner does not constantly want to watch Mamma Mia, congratulations, you have more time to watch Thor: Ragnarok which every so often she tells me she'll feel like watching eventually. For our part, I believe we have watched the film at least in part three times in the past 365 days, (and on average probably 1.25 times per year since we met) as well as gifting her with tickets to see it performed live at the Mirvish Theatre back in August, for her birthday. Thats a lot for a movie I would never watch on my own, but luckily I dont have to. If I couldn't stand this frothy tub of Cool Whip of a film, it might actually be a legitimate source of friction between us. But who is really out here disliking a film with Streep, Brosnan, Seyfried, Firth and Baranski?

I don't mind it at all. It isn't like this has become one of my favourite movies, but it has definitely become something I enjoy watching together with her. It's not technically "my kind of thing" but I can't pretend that every time we watch it I don't end up humming "Super Trouper" for a solid week. (Su-pa-pah Trou-pa-pah...) Just because a film is chemically engineered to appeal to women, doesn't mean there is nothing to enjoy about it. Its only sin is that it's a movie about women having fun with their friends, singing songs they like, ogling mostly age-appropriate men in an exotic getaway setting. It has a fun, simple plot, but there's lots going on to keep it busy. The performances are strong, barring Pierce Brosnan's utter lack of a singing voice. The visuals - the Greek setting, cinematography and choreography - are pretty. The music of ABBA - hooky and dealing mostly with a variety of stages of a romantic relationship. - is perfectly designed to be light and enjoyable, inventive and memorable and not particularly challenging to understand, and the plot of the movie follows suit. The whole Mamma Mia enterprtise is a well-thought-out one. The product is good.

The original movie (based on the 1999 stage musical) was released in 2008, so it took a few years for them to get around to making a sequel, because of the usual push-pull of reasons to defer making a sequel to an insanely popular item: rights, actor availability, creative direction, uncertainty that you can recapture the magic of the original, but on the other side, a dire financial need from producers to make as much money as humanly possible any way possible. But I noted, during the opening credits to Mamma Mia: Here We Go Again, that the film was produced by Tom Hanks and Rita Wilson's Playtone Pictures. I don't think they're greedy, mercenary people, since they've done pretty okay for themselves as actors. I think they use their film production company mainly as a way to get movies made that they themselves would like to see. That just leaves the regular reasons to be wary of a sequel: is there any point to all this, or is it just a cash in? The answer may surprise you.

We watched Mamma Mia! Here We Go Again on New Year's Eve, only 5 months after its theatrical release and only a few months after it became available to view On Demand, which is a very quick turnaround for us.

I don't think I've ever experienced a movie that was so ready, willing, and able to provide its audience exactly with what it wanted, as Here We Go Again. That includes the first Mamma Mia, as well as Guardians of the Galaxy Vol. 2, which was diligent in including copious amounts of AM Radio Oldies, Inappropriate Drax dialogue, and dancing baby Groot. The backbone of MM!HWGA is just the backstory that we already understand from the first Mamma Mia: that 20-odd years ago, Donna (the Meryl Streep character) a fun-loving individualist, found herself caught up in three brief, torrid affairs with men who would grow up to be Pierce Brosnan, Stellan Skarsgard and Colin Firth, while travelling Europe en route to Greece. Revisiting Donna's backstory while keeping tabs on Sophie puts this movie firmly in the tradition of The Godfather Part II.

Hewing closely to this established MM canon ensures a solid product, since that backstory is a proven quantity. You might think that plainly depicting scenes that were covered in exposition in a film ten years prior - studied in depth constantly thereafter by the film's fanbase - would not make for a stirring, dramatic film. You might be right, but you might also be missing the point. The point is, there were moments in the Mamma Mia universe's history that were not depicted onscreen with catchy ABBA songs and that left a gap to be filled. Many sequels have a mandate to provide exactly the same experience as the original while still providing enough original content to technically be a different movie, but few if any strike that mark so precisely. 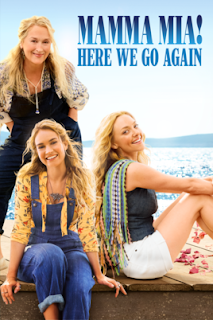 Ironically, the flashback premise means that Here We Go Again faces a unique challenge over its predecessor: its chosen task is to unflinchingly depict young Donna (now embodied by British actress Lily James) having multiple sexual encounters with multiple men over the course of the movie and letting her not feel shame about that or be violently punished - a philosophy Hollywood, prudish as it can be about sex, rarely permits. We do know Donna's affairs will result in unwanted pregnancy but it is the movie's job to remove this of stigma and indignity and instead to celebrate Donna and the young woman her daughter grows into. That it successfully does this in the context of an American musical comedy aimed at nostalgic baby boomers makes it quietly feminist, in lighthearted, sex-positive way.

In the present day world of MM Pt 2, in the film's only shocking creative decision, Donna Sheridan has passed on, leaving daughter Sophie to honor her legacy by reopening the hotel, with husband Skye stuck in New York City learning the Hotel Biz, caught between a wife and life in Greece and a big city job offer in America. Sophie spends the movie's running time fretting over the possibility that he might not come back in time for the Hotel, or ever, and also a big storm threatens her event. But for all the suspense they wring out of that, there is not a frame of this movie that should surprise any viewer who has seen the previous Mamma Mia installment, or in fact any movie ever. I would not characterize it as particularly feminist that this character's dramatic arc hinges entirely on fretting over her thinly-developed romantic partner's geographic whereabouts. But you win some and you lose some.

If the first movie was light on plot, the second is zero-calorie sweetener. But I must reiterate that that's not the point, because it provides the exact experience of a Mamma Mia film. Because this movie is in the business of crowd-pleasing, half of the songs from the first even return in new contexts. That's fitting since by my reckoning only one major ABBA song was left out of the original Mamma Mia, and you'd better fucking believe this time they made sure to include a character who turns out to be named Fernando, whether the ensuing moment makes any goddamned sense at all or not.

Famously, Cher shows up at the end of the movie, just long enough for the audience to drink in the fact that Cher has appeared - essentially as herself - and let that suffice in exchange for the lack of Streep, but not so long she has to do any of the dramatic heavy lifting. 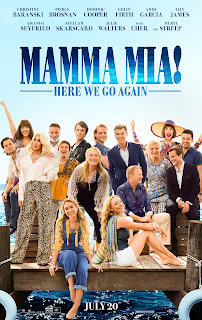 Mamma Mia: Here We Go Again is such a lightweight target to be chirping that it somehow ends up as a heavyweight worth discussing at length. All potential criticism slides off of it because this movie had one job: be a perfectly good Mamma Mia movie, and it does that with aplomb. However, because it can withstand all minute scrutiny, and because I can't actually enjoy anything, I did wind up with a few questions, which you can discuss at your next Mamma Mia Lovers' Luncheon:


None of these questions actually matter of course. Mamma Miae are all about the moment, the pure escapist release of a musical, and it achieves it in ways few movies do. I don't know that the sequel will be as cherished by Mia-Hards for years to come (although it seems to have at least been accepted by the fandom in general) and I certainly never would have chosen to watch this movie of my own volition (as I completely managed to avoid doing during the 6 years between its release and meeting Mel,) but I feel it's inevitable that this cycle of films will continue to play a minor role in my relationship, up to and including the inevitable conclusion where Sophie and Skye's baby grows up, and its first words are "You can dance, you can ji-hiiiive..."

My point is this: men, you've got to find things to like and appreciate about the stuff your partners like, to truly understand who you are with and how to relate to them. Throw yourselves into them, take them on as your own. It will help you grow as a person to cede control of the remote and give in to the fun. Otherwise it's gonna be a hard life and she's never gonna sit down and finish watching Game of Thrones with you.
Posted by Scott at 1:59 AM