I Want My Medicine: (The Music of) Hollerado & Me


When I first heard the music of Hollerado, it was in the form of the opening riff to their single, "Juliette."

It was January 2010 and I was 22 years old. The song was playing on the in-store radio server where I was working in music retail, selling Katy Perry CDs and Borat DVDs. It hit me like a bolt of lightning, at once old and new, classic and innovative, fresh and familiar.

I was at a point in my life where I, extremely misguidedly, was under the impression that I had already heard everything I was going to like. Music had always been a part of my life but my tastes hewed toward bygone eras and nothing being made in the 21st century was holding my attention. Hollerado was the first indication I was wrong. Hearing that riff was like hearing "Satisfaction" in 1965 or "Smells Like Teen Spirit" in 1991, a true gamechanger the likes of which only happens in your life two or three times if you're lucky. And if you think that seems like excessive praise, I do believe Hollerado to be the Nirvana of bands from Manotick, Ontario. 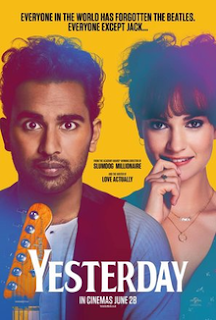 The announcement of the film Yesterday was seemingly met with a collective eyeroll from everyone under the age of 40, and a collective, "Oh, that sounds pretty good" from everyone over. Those of us in the lower bracket may be a little tired of the constant deifying of Everything From Back Then at the expense of the good things being made today. Those in the upper one probably just wanted a chance to hear all those great old songs in a slightly freshened up context.

Over a decade ago, both groups agreed on Across the Universe, which was a hugely popular movie with my friends when I was in University, but in the time since we've come into our own a little bit more as a generation and are getting a little tired of Boomer influence directing the culture.

I Said That Too!: Tweet-Saming, Comedy and Me

Every so often Twitter does this thing where it offers to show you "who you know" on Twitter, presumably by culling your contacts in a way to which you have doubtfully consented. Since most people don't run their Twitters like their Facebooks, this is an offer no sane person would ever accept.


A few days ago someone retweeted a very amusing tweet into my timeline to that effect: 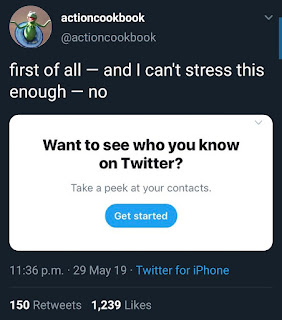 The Missing Part of the Map: Thoughts on Game of Thrones Season 8 at Halftime

Warning: While I try to be tactful about discussing plot info, if you're sensitive about spoilers, you might as well skip this one.

I first experienced HBO's Game of Thrones around New Year's Day 2013, a few months ahead of the beginning of Season 3. My brothers and I had gotten Season 1 for our dad as a Christmas gift. My brother Eric was the only one of us who had watched it and figured, correctly, that it was exactly the sort of thing our medieval-fantasy-loving father would enjoy. He watched all ten episodes within a week. The next time we saw him they were discussing it animatedly. Their energy made me want to check it out when I had previously thought it just wasn't my thing.

By the end of the first episode, I had the unmistakeable feeling that this was definitely my thing. I had had the same feeling after watching "The Wedding of River Song" episode of Doctor Who, the "Walkabout" episode of LOST, and the "Pineapple Incident" episode of How I Met Your Mother. I had the whole thing watched in under 48 hours.

Good Things Come To Those Who Wait: On Half-Past Eight PM (Part Three)

A few years after the video version of Half-Past was made, I was in a different place in life. I had finished the two-year Journalism course I took after high school and, after deciding I didn't want to be a journalist, enrolled at University of Toronto for a highly useful, very worthwhile Bachelors program in English Lit. I was growing out of my self-imposed outcast ways, nearly as likely to go out for drinks or board game nights with friends as I was to be sitting in front of my computer on a Friday night.

Early in my second year there, I was standing in line for a Metropass when I saw a flyer advertising open submissions to the Victoria College Drama Festival, encouraging student-writers to get in on it. A lightbulb went on over my head. I had, after all, written the greatest, funniest, most original one-act play in history, Half-Past Eight PM. Surely the people in charge of this festival will be salivating for my inclusion once I submit my 20-pages of genius.

Email ThisBlogThis!Share to TwitterShare to FacebookShare to Pinterest
Labels: Half-Past Eight PM, Personal, Stuff I Did, The Past, University Years, Writing

With a Lot of Help From My Friends: On Half-Past Eight PM (Part Two)

Are you ready for more self-mythologizing? Here's what happened next in the saga of Half-Past Eight PM...

A lot happened in the next school year after my success with Half-Past. My friend Ana, who had transferred to Catholic School for personal reasons, transferred back and asked me to write a movie script for her to direct, but was sadly never produced. Josh and I collaborated on a 30-minute film for CommTech where we played hired killers. And I appeared onstage for the first time outside the drama room in the cast of the Grade 12 production of The Importance of Being Earnest... as the main character's butler.

Over the course of that year I became closer with those drama kids I had been orbiting. Only my paralyzing shyness kept me from auditioning for that year's Sears Festival production of Twelve Angry Men, one of my bigger regrets in a high school career comprised mostly of regrettable moments. But I did become part of that group anyway, making friends without having to be a joiner, just as I always wanted. In the final months of high school it kind of finally felt like I belonged somewhere. My personality had taken three and a half years to bake, and I was very close to shedding the pervasive feeling that they didn't really actually like me. I just wished I had more time to enjoy it.

Email ThisBlogThis!Share to TwitterShare to FacebookShare to Pinterest
Labels: Half-Past Eight PM, Personal, Stuff I Did, The Past, Writing

A Strange Form of Revenge: On Half-Past Eight PM (Part One)

As someone who is prone to nostalgia but optimistically suspects his best years still lie ahead I have a tricky relationship with successes of the past, even as moderate as they may be. While putting on a reasonably successful local theatre theater production is a pretty low bar for greatness it remains the thing I have done in life that was seen and enjoyed by the most people. So since this is the blog about me, please indulge the part of me that is a legend in my own mind. Here's a little reflection on the 15th - and 10th and 13th - anniversary of Half-Past Eight PM.

It began as revenge. A very specific, strange form of revenge. The kind where the people you're getting revenge on aren't even there to know it.